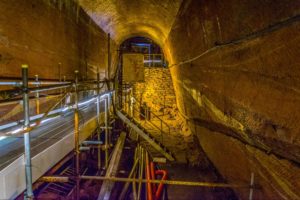 Humans are tunneling animals, we may not think we are but we are. We tunnel deeper, further and wider than any other animal. Furthermore, our tunneling systems are complex and unlike anything else in the world. Historical tunneling networks are all around us, they carry water, vehicles and ourselves. We have dug through mountains, under oceans and have even developed entire urban areas and cities underground. However, human tunneling is not a new phenomenon. The oldest human tunnel networks date back to over 6,000 years ago and the UK is no exception. The UK is scattered with abandoned tunnel networks, some of which you may not have heard of.

The Groundsure office, situated in Brighton, actually overlooks a mysterious hidden network of tunnels. The tunnel network starts from the Royal Brighton Pavilion and was in fact commissioned by King George IV. He commissioned John Nash, who built Buckingham Palace, to build the Royal Pavilion when he was Prince Regent. The Brighton Pavilion is known for its unique Indo-Islamic exterior, however a hidden network of tunnels were built years later1. These tunnels were rumoured to link the King to the house of his favourite lover, however, the tunnels were actually completed well after the relationship was over. These tunnels link the Brighton Pavilion to the stables, which is now the Brighton Dome. They were actually built so the king could escape the gaze of the people while moving around the palace grounds, after years of exuberance had left him with gout, grossly overweight and unpopular with his subjects.

The Royal Brighton Pavilion was built in three stages as a seaside retreat for George, Prince of Wales, who became the Prince Regent in 1811, and King George IV in 1820.

There are other examples of secret tunnel networks across the UK. One of the most interesting is the Willamson tunnels in Liverpool. This tunnel network, towards the east of the city, is quite extensive and is shrouded in mystery as the purpose of the construction is not known with any certainty. They were constructed in the early part of the 19th Century by Joseph Williamson. He was a local businessman, property owner and a philanthropist2. The tunnels were built after Williamson had bought land to build houses. He employed a number of men to dig tunnels, build vaults and construct arches through the sandstone outcrop beneath the houses3. These tunnels have become embedded with local folklore and subject of widespread speculation.

Theories range from commercial quarrying, a philanthropic desire to provide employment, or even that Williamson himself was part of an extremist religious sect. Whatever the purpose, the Williamson tunnels have been described as probably the largest underground folly in the world4. However, it doesn’t change how interesting they are or how dangerous they are if you were to dig into one. Public interest has grown in the Williamson Tunnels in the past few decades and parts of them are now open to the public. The Friends of Williamson’s Tunnels carry out investigations and campaigns to protect the area and try to determine the reasoning behind the extensive tunnel network.

Interior of the Williamson tunnels in Liverpool, England.

Not all tunnels within the UK are so mysterious. There are some well known tunnels that have hidden areas you may not expect. It is well known that the UK has the oldest underground railway network in the world. Some of these tunnels are over 150 years old, but have you ever wondered how many stations and lines are disused and abandoned? The first underground railway opened in London in 1863, as a way of reducing street congestion5. The network has grown dramatically to over 249 miles of track and serving 272 stations. However, there are several old stations and lines that are no longer in use6.

There are in fact 49 abandoned underground stations throughout London7. The most famous is Aldwych station (see above) which has turned into a popular filming location for films such as V for Vendetta, 28 Weeks Later, Darkest Hour and Fast & Furious 6. Another famous abandoned station is Down Street. This station was closed in 1932, but it was reimagined during the second war where it was home to Winston Churchill and his war cabinet6.

There is another network of tunnels in London you may not have heard of. It wasn’t designed for transportation, or for royalty. It wasn’t actually designed for humans at all. It was designed and built for our letters. At a depth of about 70 feet there are over six and a half miles of railway tunnels. This network of tunnels was built to connect the West and East of London when crossing London itself could take a long time. It cut the journey time across London from a few hours to just 30 minutes. The railways are small and only 9ft in diameter. They were built with a double 2ft gauge track and the trains were driverless8. The tunnels were left incomplete during the First World War where they were used to store and protect art treasures belonging to the National Portrait and the Tate Galleries. The underground mail rail network was eventually opened in 1927. It ran almost non stop, 24 hours a day until it was closed in 2003. These tunnels are now also open to the public by The Postal Museum. Groundsure is the only comprehensive data provider of the postal mail network and the Williamson tunnels. We also include all data examining the abandoned tunnels and stations associated with the London underground. This data ensures that you know exactly what is under your feet when digging in certain areas in the UK. Ensuring that our history of tunneling in the UK no longer remains a secret.

Climate Change: 7.65 Million Homes Could Be Exposed To Subsidence Risk by the 2080s