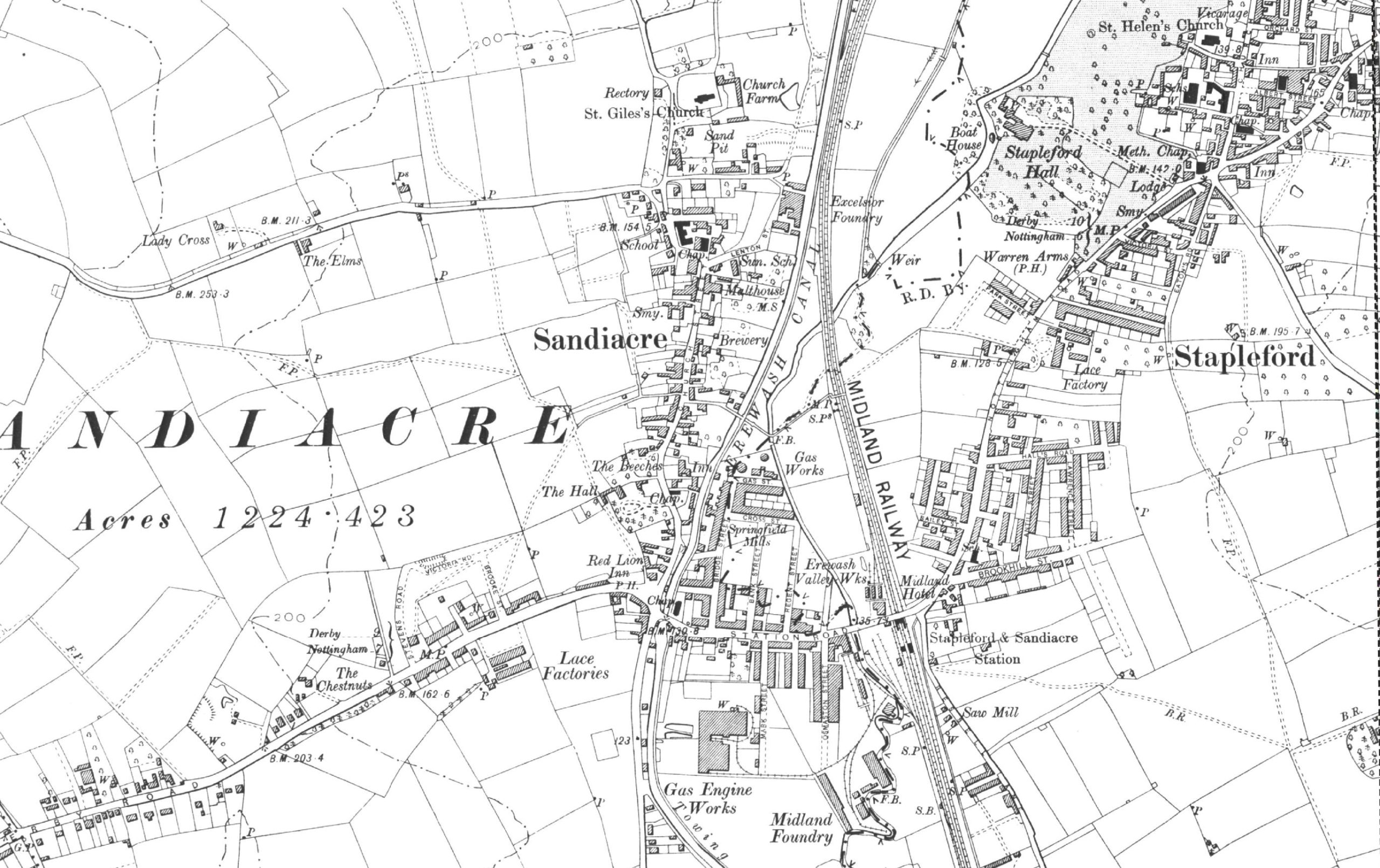 In the first of a special two part blog, we will review the contaminated land regime and how Part 2A of the Environmental Protection Act 1990 has been managed in practice, through the lens of some specific examples. It highlights how the noble intentions of rooting out the worst offenders has been blunted over time and that the planning processes have become the mechanism driving remediation in many council teams.

Sandiacre Gas Works site in Erewash Derbyshire is a typical industrial brownfield plot, located on the site of a small, former gas works commissioned by Terrah Hooley, a fraudster and developer of the first industrial estate. The gas works were built in 1888 to supply gas lighting to Hooley’s adjoining Springfield Mill lace factory, a part of the ever expanding Nottingham lace industry.

The Mill was to the south east of the gas works in Sandiacre Parish next to the River Erewash which was diverted for the benefit of the Mill and made the development into something of an island formed between the canal and the river. As part of development of the gas works, Hooley agreed that it would supply coal gas to 50 street lamps in the local area, on the condition that the local council provided funds for the gas.

Two street lamps remain to this day, as does the Mill, which is a Grade II listed building which has been converted into impressive apartments. Historical records show that the gas works were operated from at least 1899 to 1901, and it should be noted that certain gas works features can be observed as still being present on site as late as 1924. Specific details on the exact operational period of the gas works site are, however, limited.

Surprisingly, lace was still produced at the neighbouring mill until the early 2000s before the site was redeveloped for residential use (Derbyshire Historic Environment Record, 2005). As sites go, it is typical of a brownfield plot dating back to the Victorian age of industry. It has also been designated under Part 2A of the Environmental Protection Act 1990.

Contaminated Land Designation
Part 2A saw Local Authorities in England take on a duty of care to investigate unacceptable risks posed by land contamination to human health and/or the environment. At the time, Local Authorities employed Contaminated Land Officers in Environmental Health or occasionally Planning teams as they started the desk-based assessment of properties. The legislation was intended to identify the worst sites that were causing actual environmental harm and then seek out the original polluter to remediate the property. This is not how it has rolled out.

The most up to date assessment criteria are set out in the April 2021 Statutory Guidance (England) (other documents apply in the devolved regions) and requires a site to present a Significant Potential of Significant Harm (SPOSH). There are assessment phases to establishing SPOSH and this starts with a preliminary investigation and a conceptual site model. This takes into consideration potential sources and the environmental context, which requires the potential pathways that could connect the sources to potentially sensitive receptors. Specific receptors are set out in the Statutory Guidance as being people, controlled waters (ground and surface water), ecology and property. Each of the plausible pathways needs to be assessed for risk before further ground investigation and sampling are used to confirm the preliminary assessment. The identified concerns are known as a source-pollutant-linkage.

Designation of Sandiacre Gasworks
This process was applied at Sandiacre Gas Works where Erewash Borough Council identified the site to be a potential contamination risk to controlled water in May 2007. This was the first step to a more detailed investigation. As a controlled water was the potential receptor, the Environment Agency was asked to conduct the targeted site investigation the following year in 2008.

The site investigation identified several contaminants above the Environmental Quality Standards (EQS) in shallow soils and groundwater. Ammonium was recorded at 5 times the EQS, xylene was recorded at 10 times and naphthalene at 160 times the EQS respectively. These contaminants presented a significant potential source-pollutant linkage (SPL) to the minor (Secondary) aquifer.

Further assessments showed contaminants moving through the soil and clearly presenting a potential for the contamination in the soils of the site to impact the water bodies that formed some of the site boundaries.

It was concluded that xylene and naphthalene were unlikely to be of concern beyond the site boundary. However, ammonium, which is far more soluble, was likely to be more widespread within the surrounding environment, including the River Erewash. This made for an interesting situation as governmental guidance at the time enabled the occurrence of impacted controlled water to be deemed a reason to designate a property as ‘Contaminated Land’, despite whether the investigation concluded that significant harm had occurred or not. This would not have been the case were it any other receptor.

As a result, Erewash Council designated the gas works as Contaminated Land on 12 February 2010.

At the time the property continued to be used in the manufacture of mattresses, with the infrastructure and buildings in daily operation. The local authority recognised that there would be huge difficulties to remediate the site both with the current business operation and listed buildings to consider. Furthermore, the consequences of the pollutants linkage were viewed as relatively low risk and thus would be financially disproportionate to serve a Remediation Notice.

Therefore, the council, with support from the EA, issued a Remediation Declaration making it the only plot on the Council’s Part 2A designation register. But, the Council stated that although the site had been formally designated as Contaminated Land, no remediation was required. The current occupier was not considered to be the original polluter, it was held to be a ‘Class A’ person because the drainage was leaky and thought to be a significant contributor to the migration of the pollution. As a result, the operator was required to survey and improve their drainage. The notice also stated guidance and remedial tasks to be completed, if the site was to become vacant or redeveloped.

Part 2A versus development as a route to remediation
The purpose of Part 2A was intended to make the polluter take responsibility and pay for their contamination. However, this is not how the figures play out. A study of Soil Health published by the government in 2018 identified that of all sites remediated between 2000 and 2013, it is estimated that 83% (72,000 sites) were dealt with through planning applications rather than through the Part 2A process described above.

A further 7% (5,500 sites) were dealt with through Part 2A duties. As a result, although this site was designated under Part 2A, presumably with the intent to drive remediation, it is being brought forward for development to bring it back into constructive economic use in a planning application submitted in September 2020.

In the next part of this blog we shall consider some of the issues surrounding the constraints on the development of small brownfield plots.